The Top 26 Causes of Car Accidents 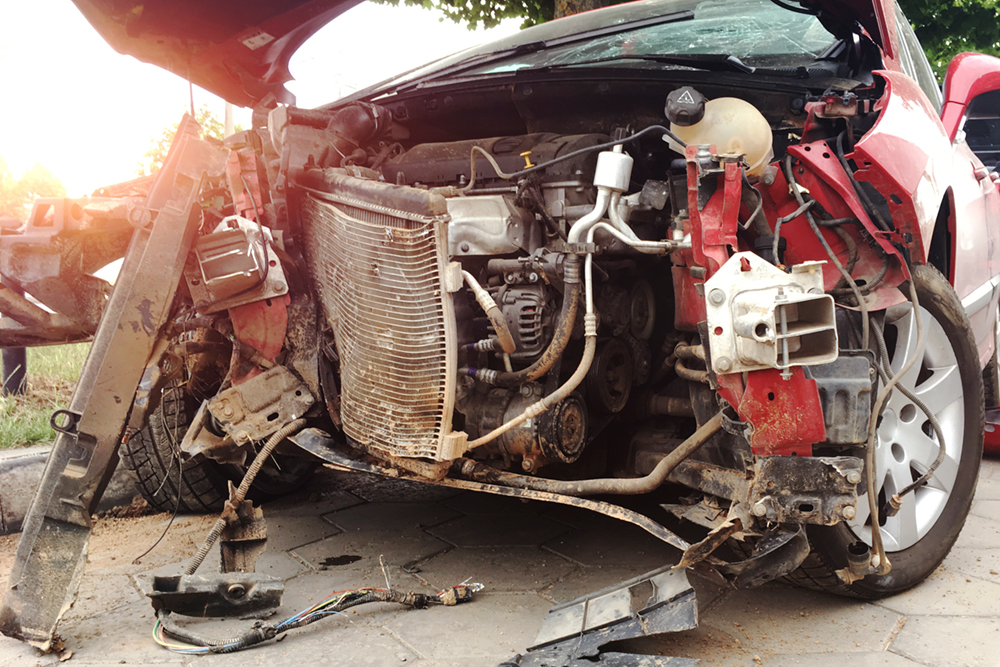 Since the time we first stepped foot in a car, we learned and heard about the dangers of driving. We all dread and fear the day when a car accident happens to us or someone we know. There are countless causes for car accidents; all of which can be avoided with the proper knowledge to prevent them. In no particular order, this article is a general list of the main causes of car accidents. Utilize this knowledge on car accident causes to help prevent you from getting into future accidents.

Out of all of the causes of car accidents in this article, distracted driving is the number one cause. Part of this is because of the emergence of cell-phones. Looking at your phone to text, change a song, or to call someone are all relatively new causes of distracted driving.

Drunk driving doesn't need an introduction. By now we should all know about the awful nature of drunk driving. Driving drunk can not only potentially hurt you, but it also endangers the people around you.

Ever drive the speed limit, and see a car zoom passed you? Speeding is reckless and can ruin people's lives. Driving too fast can cause someone to lose control, damage their car, and much more. The truth is, you're not going to get anywhere faster while speeding. Trying to cut a few minutes on a trip isn't worth it since it can potentially ruin your life.

The weather has always been known to negatively hurt how someone drives. Rain can not only cause your car to slide and lose friction on the road, but it also affects your vision while driving. Excessive rain downfall might cause you to turn into a lane too quickly, or not be able to see things around you.

Just like rain, snow can seriously impact a car's performance and a driver's vision. Snow causes ice which causes a car to drive poorly. During blizzards or snowstorms, the heavy downfall of snow causes drivers to not be able to see properly. Just like rain, it can cause you to turn into a lane too quickly, cause your car to slide, and not be able to see anything around you.

We've all been in that situation where we see a light turn yellow and try to speed through it to “make the light”. The truth is, a habit of doing this will endanger you and the people around you. If the light changes way earlier than you expect, other drivers will just go as soon as they see a green light and cause a horrible accident.

As noted before, driving without having the best vision will negatively affect your odds of getting into an accident. If you end up driving the countryside while it's dark out, know to drive slow and pay close attention to your surroundings. People end up driving how they normally drive during the day at night and act oblivious to potential obstacles during their route.

Similar to people who speed, people who drive aggressively to the point of tailgating can cause horrible accidents; especially on the thruway. If the car in front of the tailgater ends up having to come to a quick stop, then the tailgater has almost no time to react. It's important to not be aggressive to the point of tailgating; no matter the circumstance.

Not being aware of signs, and where you should turn, can potentially cause a serious accident. Always be aware of your surroundings when driving; especially for “wrong way” signs. Driving the wrong way on a street will make it very difficult for you to fix; especially on thruways.

Whenever someone first gets their license, they're bound to make a mistake. Inexperienced drivers can cause an accident for a plethora of reasons. Taking a turn too fast, driving the wrong way, switching lanes improperly; all are mistakes inexperienced drivers make.

Similar to drunk driving, driving while under the influence of drugs is just as bad. Not being in your normal state of mind will only impair your ability to properly drive.

We've all been on that uneven and pothole-filled road that wreaks havoc on our car. Not driving properly on a road that hurts your car can cause an accident with cars around you. Always be safe when you're on a road that's filled with potholes.

Sometimes bad luck just happens, and your tire fails. Driving on the thruway and getting a flat tire out of nowhere can cause some serious damage to the people around you. There are some steps you should take to avoid a damaged tire, and tire safety is definitely an important thing to know for any driver.

Sometimes construction sites come out of nowhere and confuse us with how we should drive around them. Occasionally, the site forces drivers to do stupid things and ruin the cars with them.

The majority of us have driven on a road just to see a bunch of deer to randomly run across the road. If your reaction time isn't good, you can cause a serious accident on your car. Always be aware of potential animal crossings; especially in the country.

Speeding, tailgating, going through red lights are all forms of reckless driving. In general, reckless driving is something no one should do and will more than likely cause an accident at some point. It's easy to not reckless drive, but for some reason people still do it.

Similar to having bad luck with a tire, sometimes you just have bad luck with your car. Always be on top of getting your car looked at, and be aware of any car defects that get announced by the car manufacturer.

Sometimes, a driver will change lanes without looking. This has been known to cause devastating accidents; especially on the thruway. Always look before you change lanes.

Sometimes people just have a bad day and drive reckless because of their road rage. Maybe a car cut them off, and they try to speed up to have a “word” with them. In the end, road rage causes a lot of harm when driving.

21. Driving While Being Exhausted

If you're exhausted, it's better to not drive. Don't try to save time by driving through the night or whatever plan you have to non-stop drive. If you drive while being tired, it's actually worse than being drunk. Pull-over if you feel like you're falling asleep while driving.

As noted before, anything that affects your vision while driving is horrible. Fog has been known to cause accidents for people; especially at night. If you're driving in fog, drive slowly and be aware of your surroundings.

Every now and then, a driver is forced to take an extremely sharp turn. Sometimes drivers take the turn too fast or don't pay attention to how sharp of a turn it is.

One of the main dangers of cars is how fun they are. They're especially fun when you get a few of your buddies and try street racing; until you get an accident that ruins your entire life. Don't do something that puts you and everyone around you at risk.

Dangerous winds can seriously impact how you're driving. Sometimes it's best to not bother driving if there is a high wind warning. Always be up on the current weather, and what's expected to come when you plan on doing some long drives.

Although this seems like something that's only ever seen in movies, police car chases happen every single day in real life. The best answer to avoid the damage of them is if you hear sirens. If you hear sirens, pull over and get out of the way. Not paying attention to sirens will put yourself at serious risk for injury.

The best ways to avoid a car accident is to not make poor mistakes, be aware of your surroundings, drive safe, and understand when you shouldn't drive. It's better to be safe than sorry; especially when you're driving. If you've been involved in an accident you may be entitled to compensation, especially if you've experienced lost wages, pain, and suffering. Call the experienced law office of Betz and Baril at (865) 888-8888.